Robert was a founder when the IBHL hadn’t quite formed. He introduced his brother Brian to the game when it was a pick up league run by someone else. After that first year Robert and Brian decided to run one of their own and for 10 years they had a group of players come out on Tuesday nights for a game of pick-up ball hockey, where the sticks were thrown in to center ice and then divided into teams of light and dark. Both brothers had turns between the pipes and as players on the floor. When Brian turned the pick-up games into a league Robert continued on as a player for Carney Plumbing for 4 years. Playing with a big heart and some defined talent Robert was the first person inducted into the IBHL Hall of Fame.

Bill had an outstanding career at the Bolton Enterprise (later the Caledon Enterprise) was always a proud IBHL supporter. Bill published all of the game results for the IBHL and added his own personal twist to the stories submitted. He had shown up to all of the finals to snap a shot of the winning squad and put them in the paper for their just desserts. It was with great pleasure that Bill was put into the IBHL Hall of Fame in 2004.

Randy was the most prolific scorer that the IBHL had ever seen. He won the regular season scoring title 4 times in his 6 season career and once in post season play and led his team to the finals in the first 2 seasons winning it in 1997. All goalies feared Randy when he wound up for his cannonading drive from the top of the circle. Randy was a great player and a good man to have on your team, always supporting his fellow players and showing respect to all. 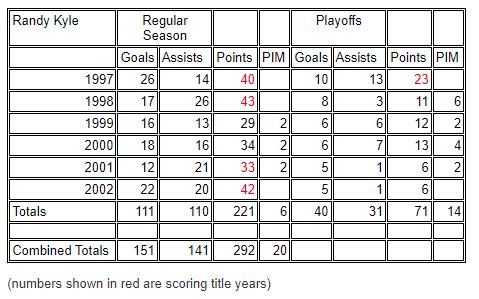 Chris showed many nights why he was able to capture top goalie honours twice in both the regular season and the post season. He backed stopped CEAV for five seasons and one championship. Chris started his IBHL career with the Tuesday night pick up league in Inglewood. Always a tough keeper to beat Chris was always pleasure to play with and against.